The United Reformed Church in Bramhall

The history of our church began a long time ago.  The word “Reformed” is the clue.  The “Reformed” churches are those which have drawn their early inspiration from the reformers of Switzerland.  They have been influenced by the thought of Martin Luther (1483-1546).  The churches involved are largely those we have known as “Congregational” and “Presbyterian”.

In the 16th century Reformed churches were founded in England.  They were “Separatist” congregations which stoutly defended the right to arrange things for themselves and be independent of the state.  In the 17th century the “Independents” (as they became known) were able to clarify their belief and their approach to life.  In due course, these churches were called “Congregational” churches.  In this area, we can trace the “Independent” thread back to the 17th century in places like Hatherlow (Chadkirk Chapel), Macclesfield, Stockport, Tintwistle and Wilmslow. At a meeting held on July 2nd 1902 a Congregational church was founded here in Bramhall.  There were twenty-five members.  The church building was opened on the present Robins Lane site on 12th March 1904.  Those buildings were demolished in 1991 and the buildings we use now were built in phases and opened between 1992 and 1998.

The United Reformed Church was formed in 1972 with the union of two denominations.  One was the Congregational Church in England and Wales (which provided a forum for all the local Congregational churches) and the other was the Presbyterian Church of England.  At the same time, the church in Bramhall met, thought about the issues, prayed and voted to become a congregation of the URC.  In 1981 the majority of the Churches of Christ joined the united church.  A further development took place in April 2000 when the Congregational Union of Scotland did the same.  If you would like to know more about the current structures of the URC and how it works on a national level, please ask (or go to https://urc.org.uk/about-us.html).

The World Alliance of Reformed Churches links us to a world-wide fellowship of some 75 million Christians in over 100 countries.  We also work with churches overseas in the Council for World Mission.  In Bramhall we are happy to be part of the story of the Reformed Churches. 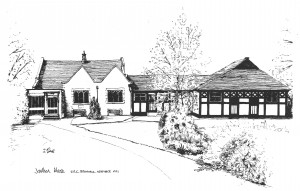